Venu Lane - The festival of lights

The heart used to thump aloud even as our bus entered the bus stand. From within the bus, I would try to spot mama waiting to receive us. And when we got down from the bus, sister and I would unsuccessfully try hugging him with our little arms. During the long walk to home, mom would ask him if the others had arrived - calling out the names of their brothers and sisters...and we would eagerly listen to his answers. Like any kid, we had our favorites and we were eager to know if they were visiting too. Plus, there was always the undeclared competition as to who arrived first.

The otherwise badly lit streets would pose a romantic appearance with numerous little lamps placed in the porch, steps and parapets - adding to them, the brightly lit faces of the residents. Each street had a couple of relatives or friends who would greet mom as we walked past their homes. Occassionally, we would be stopped by the warning-cries of the kids who had just lit a cracker, sangu-chakram or bushvaanam. Some kids would yell late and the crackers would burst right under our march. Sister and I would stick to the protective heels of mama holding his legs tightly. 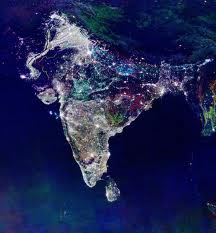 When we reached Venu Lane, we would find grandpa anxiously walking between the entrance of the house and the entrance of the street to see if we were arriving, as if we would lose our way if he were not at the street corner to receive us. The hundred meter sprint would start as soon as we reached the street corner. We would run past the neighboring houses. It used to be fun running past uncles, aunts, cousins and stop only at the kitchen - for, it was the most opportune moment to prove to the world that we were the most favorite grandchildren of grandma. When we walked out of the kitchen, we would have a plate full of kachayam, rava laddu, adhirasham, murukku and laddu all of them filled with the expertise of grandma and aunts.

Then it was boasting time with cousins about "first rank", "class leader", "first prize", "new cycle", "new TV", "Rajini movie" etc. As the clock neared 9pm, all the kids would start "the wait" for "chithappa". He was the one who financed our crackers every Deepavali, but he typically arrived late after closing business for the day. During "the wait", everyone would make their demand to me  -  because, I was the one always chosen by chithappa to accompany him to the cracker shop. The big cousins would want saravedi, atom bombs and onion bombs. The slightly younger ones would want lakshmi vedi, kurivi vedi, double shot and seven shot. While, saattai, maththaappu, sangu-sakkaram, bushvanam would be recommended for the younger ones. Used to sleeping by 8pm on school days, I would find it hard to keep my eye-lids open until chithappa arrived. But all the sleep would vanish the moment he beeped the horns of his bike.

At the cracker shop, the shop-keepers would recommend all the new arrivals...though tempted to buy them, I would stick to the demand list given to me, recalling who wanted what. When I was done calling out my list, chithappa would add some of his childhood favorites like bijili vedi, snake pills, cartoon creepers and the forbidden ones - that is, rockets -  the ones that my big cousins wanted but would not ask for - fearing the wrath of the elders in the family. Back home, someone would take the cracker box and put it securely on the loft. I would ask mama to check if the box had maththaappu, then I would ask him how many packets of saattai were there, then I would say we missed bushvaanam. Understanding my intention, a pack of maththaappu would be given for immediate entertainment.

In the meanwhile another young group would have opened the mehandi desk, trying out designs from simple initials to Eiffel tower to complex geometry in the palms and feet. Kids running behind the elders to have their backs rendered the luxurious service of 'itching' which would have been made difficult by the mehandi decors.

Then would start the big fight to find a place for everyone to sleep. I would demand a place next to grandma or grandpa and also next to my favorite cousin. All the pranks for only a few minutes as I would have already crossed my stay-awake-threshold. On the morning of Deepavali, (read "3am"), the house would be in a busy mode. Some would have already gotten ready, some would be drenched in oil waiting to take bath and some would already be taking bath. Among the kids, there would be this big race to take bath first - for - the one to take bath first had the privilege to light the first firework. But that involved an opportunity cost - kids were given oil bath by one among the aunts or grandma who took turns. I used to be scared of being given bath by big aunt - for - she did a thorough job - clutching the hairs as if one would become bald after the bath. During the course of the bath she would declare that she was going to wash off all the melanin. So, I preferred waiting for grandma's turn and sometimes pulled her out of kitchen to take up the all important job of bathing me first.

After a short innings with the light-weight crackers, it would be time to wait for grandpa to give us our new dresses. Then it would be time to go around the street flaunting our new dresses. After this ramp-walk, it would be time to watch the big kids perform their challenging act of bursting the heavy-weight crackers. When no one was watching, they would secretly bring a bottle(the launch pad) and start launching the rockets. Some rockets used to take diversion and traverse through neighboring houses and some used to land on nearby roofs. By this time, someone among the elders would have sensed the mischief and come out to ban further launches. The big kids would be condemned for violating the ballistic missile treaty and chithappa would be blamed for funding the rockets. The missile launches having been banned, it would then be time for the atom and onion bombs. Grandma would shout at us saying that one of these bombs would collapse the house. She did this every Deepavali. But the house stayed intact everytime.

Amidst the state of chaos, breakfast, tea-time and lunch would happen as scheduled. It is difficult to imagine how the elders in the family kept track of who had taken breakfast/lunch and who was yet to take food. Someone or other ensured that the kids were fed. It used to be gala time through out the day with no restriction on what to eat and where to go. At the fall of night, grandma would ask all of us to gather and perform the "drishti" ritual fearing that someone would have jinxed our togetherness.

The time to start packing would eventually arrive. One by one, uncles, aunts and cousins would start leaving. Those were the saddest moments at that young age. The next vacation would seem far far away. We would exchange parting gifts from our exclusive collectibles like chocolate wrapper, colour buttons, 2paise coin, spiderman sticker, etc. The next working day, we would be in a different world dressed up in school uniform and worrying about homeworks and recounting the Deepavali celebration to our friends in school. The only solace used to be that Kaarthikai deepam would give an opportunity to relive those moments in a miniature.

Labels: About Self, English, Venu Lane

Good one Bhupesh.. As always Diwali is THE festival of festivals :)

Went down memory lane. You wont believe that i almost recounted everything in this write-up to Eugene. I have one more fun aspect to share - Mehendi. Those were golden days.

@Keer: Mehendi has been applied now.

even though mine was never like this but i could vividly imagine the complete day's events!

For us malayalis, it was Vishu vacation instead of Deepavali.We do not celebrate deepavali like in other parts of India.Your post took me back to those good old days...Apart from crackers, mathaappu and sweets, my distinctive memory is how we kiddos used to eagerly wait for vishukaineettam- money which elders give as shakun.Those days they gave us 5 or 10 paise.
I was not good with numbers then [same applies even now]. My clever cousins used to give me all their 5 paise,
luring me with the count of it and take away all my 10 and 20 paise.

I have to call them all and settle some scores...:-)

Nice to recall the golden days..
I used to tell to your anni and friends about our deepavali events...particularly about our financier of deepvali crackers:))

As usual, a great write up Bhupesh :). There is a difference between reading between the lines and visualizing between the lines. This post made me to do the latter and that's a touch not many writers can provide. You have the writing skill with the right choice of words and narration to make the readers visualize also. I was able to visualize your complete Deepavali experience and cherish mine too:)