Allies in Wonderland - Part IV (The one from Chicago Airport)

After a busy and tired, day1, we exited the park discussing religion and science. After a quick dinner, we reached our motel which was very close to the west entrance of the park. We enquired the landlord regarding the best time and place to see wild animals. He suggested that we start early in the morning to be able to see some wolves at least, if not bears. We planned to start at 7 in the morning.

Those of you who are familiar with our group, especially the ones who invited us for food, would have guessed what time we started next day. 8am. The sun for some reason, was very excited and was shining bright that day. So, the opportunity of seeing wild life ruled out, we took a very good breakfast (which we still refer as Nagma breakfast, because the girl who served resembled actress Nagma) and geared into the park for our second day in wonderland.

The first major attraction for the day was 'Mammoth hot springs', but we decided stop on the way for anything other than Geysers. After we crossed Norris point, we found a vast grassland. There was a snow capped mountain at the horizon. The morning was very serene and the scenery was picture perfect. We took many snaps and experimented some poses. One of them was the 'Khalbali' shot - like the one in Rang De Basanti. Seshu clicked at the right moment and the result is what you see below. (The elaboration is because this one is my favorite shot of the trip).

We drove through many hair-pin bends. We stopped in between for the occassional small water falls, streams and valleys. 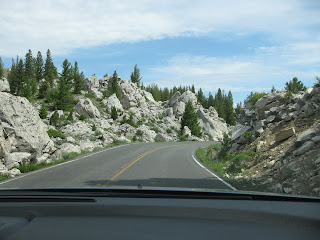 We reached hot springs...if that place were to be discovered on the day we went, they would have probably named it 'Hot Summers'. The Mammoth Hot Springs is made of what they call 'Terraces'. The rocks ooze out hot water in the terraces which flow down and in combination with clacium carbonate, algae and bacteria taint the rocks with different shades. The place should have been more beautiful in the past because some of the springs have not been active recently. I will let the photos speak for the beauty of the hot springs. 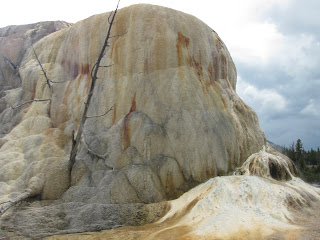 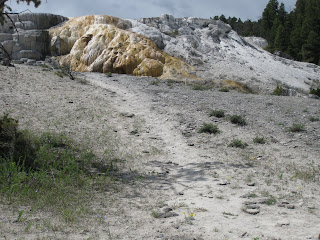 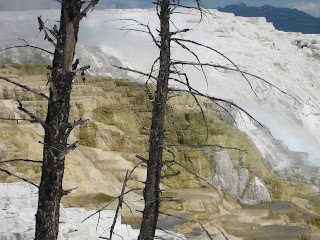 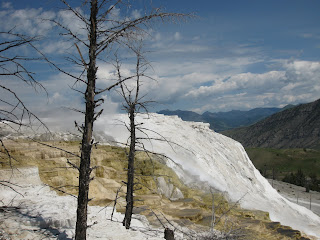 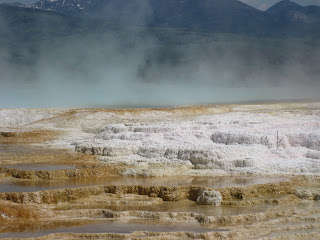 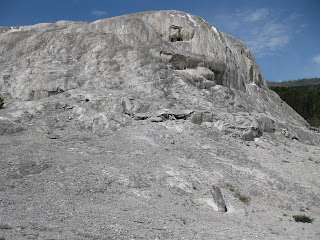 The scorching sun was testing our perseverance. We got some really great pictures. Then, we stopped for lunch - a good one. Next destination was Tower Falls. We had to trek a bit here again. The steep path took us closer to the yellowstone river bed. But, this path was still under construction and did not take us close enough. I am sure, we would have had some great photos, had we gone closer to the banks. 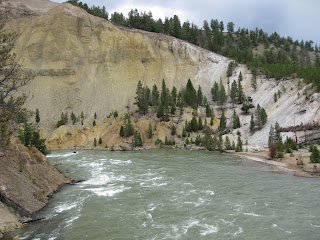 Next, we discussed the possibility of visiting Tatton park. Considering the geography, we decided to drop it from the plans and instead, try our luck at Lamar Valley (wild life). On the way to Lamar valley, we found a guy with sophisticated cameras, watching something keenly. We learnt that there was a Coyote on the hills. I thought Coyote must be a variety of tree, because my eyes showed me only trees. Srikk, used his public relations skill and managed to get us all preview of the coyote through that sophisticated camera. Srikk, Siva and Seshu said they saw it and I believe them :)
Then we ventured further into the valley. It was a sunny evening and the valley was green. The only animals we could see were yaks and one deer. 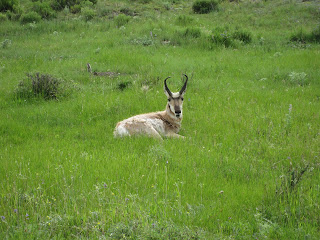 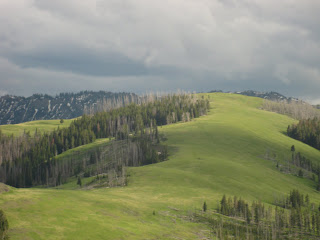 After whiling away some time there, we returned towards the exit gate. We still had some time left before the last show in the Yellowstone iMax theatre. Siva suggested that we go to the 'Artist point', which we decided to skip the previous day. We followed the signs and reached the artist point. It is called so because, some artist had painted a view of the lower falls from this point and that is what increased the popularity of this place, prompting the Government to make it a national park. So, what is so special about that point...? We had the same question, until witnessing the below:) 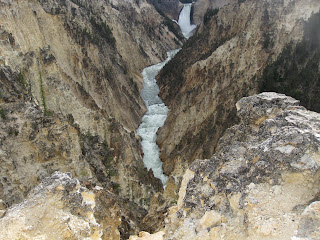 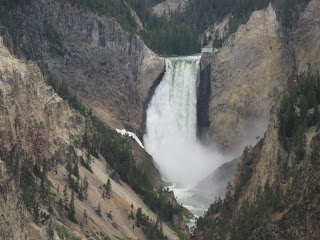 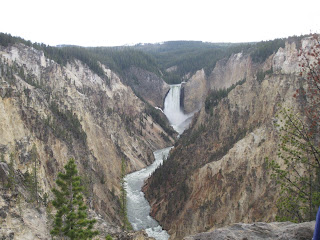 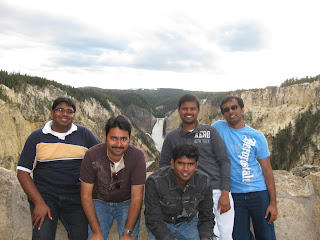 With full satisfaction, we drove towards the exit. We made it for the imax last show on time. When we came out, the sky was full of colors. It was independence day in US and there were fireworks to celebrate that. It gave a finishing touch to a well-planned, full value trip. We went to bed, hoping to get up early and start towards Salt Lake city.

When we went for the trip, I was thinking that would be my last long weekend in US....but then within the next 2 weeks, I came to know that I had to be in US for another long weekend. After discussing many options, we decided to go to Las Vegas and SFO. Hopefully, Jai or Seshu will write about that trip :)
Posted by bhupesh at 8/30/2009 10:01:00 AM

Labels: English, The one from Chicago Airport

good one HM.. cant believe u wont be there for next trip !!!! all over in a flash (yes the last photo that we took in airport had flash ;) )

Hmmm... a long lasted posts... Though bored in between it must have been a great experience to you guys...