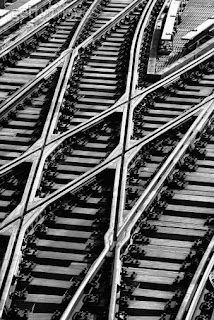 Thing are taken pretty much granted nowadays. especially such train jouneys. its not just for an overnight journey but even for journeys of 24+ hours travel also i have seen people simply getting into the trains and then asking others to adjust!

Aah as for the 1st para where you mentioned those 3 points!! i can also so relate to it!

How much ever prepared we are ... even aftergettin ginto train we wait till TTE comes and gives his confirmation. i have no idea why such a feeling seeps in!!

Good one :) I like your narrative style.. you are very much at ease with the flow. .

Life ,indeed, throws a lot of challenges with those momentary dilemmas and question of guilt and it makes every sense to go sans principle many times to tackle those. Very good narration in mixing events, thoughts and substance, Bhupesh. Tell me one thing - is your ability to avoid unnecessary talks enhances your ability to express with writing so nicely? :)

@Sounds and 'Morgan - thank you :)
@Jai - thanks for your appreciation. Talking doesn't give me sufficient time to form ideas and choose words whereas writing gives me an advantage in that aspect. So, it is really a handicap which I try to cover up by remaining silent :)

I too had a similar experience in a unreserved compartment during my last journey to Karur.

As you know a row can comfortably seat 4 passengers and there are already 4 seated(and I'm one among them). A well dressed person, aged around 40, came and asked to accomodate him in the row. All 3 were hesitant and looked here and there. I felt I can help him by just moving a little. I too felt I'm taking for granted due rights of other three?? But as I moved a little other people too adjusted halfheartedly and finally he got seated.

Time passed by... Destination for one of original 4 arrived and he left. Now all of us were comfortable,esp the 5th man. Shortly, a 65-70 yr old women poorly dressed with free hair, filthy bag on her shoulder approached for seat to the same person who approached us. And what do you think would have happened?

To my surprise, he didnt even gave ears to her request. I got angry and thought of asking him, Is this a noble deed expected from him? But I didnt.. I waited for him to respond. He might have felt uneasy for he being a women. But there were ample opportunity for exchange of seat as there were two more women on opposite row. But he simply ignored her action and took a book from his bag and started reading it. And I dont think gender would be the only cause for his denial!

After a while I stood up and asked her if she is willing to be seated. She too hesitated for the response from my neighbour had already hurt her. Soon another elderly women asked her husband to exchange his seat and the lady had a deep breath with a seat:)

This incident reminded me of typical behaviour of most of government employees!!!

Bib B....this reminded me of my train journeys.I seldom travel by bus because of my travelling sickness and every week I travel by train.Tell you frankly, there was not a single journey which has gone without any incident-often unplesant ones.Being a short trip I usually travel in general compartment or ladies compartment. The fact is I never had a chance to select from the alternatives that you suggested- 'act like an individualist or communist or realist or communitarian or idealist.' Instead I always had to turn into a Monster-every single time.This definitely did not stop me from taking train:-)I chose to fight everytime..sometime for me..sometime for others.