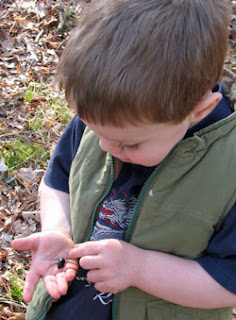 My maternal grandparents' house, built with bricks was never coated with cement or paint on the outside. The rooms, except the hall, were roofed with terracotta tiles. Such an architecture inherently provided with lot of crevices, clefts and other 'thesaurus'eous openings. Perfect setting to house all verities of arthropodians. Arthropodians, aren't just another groups of 'podians', they do have intimidating features.

Along with the arthropods, there were other creatures: the 4-legged, the 8-legged and the 5-legged (a differently-abled cockroach who lost a leg in an encounter with grandma). There were also the multipedes, centipedes and even wikipedes ("Wiki" is a Hawaiian word meaning "fast" or "quick"). There were so many of them that we did not even have to install an antenna when the house got its first TV. There was no need when all those arthropods had at least two antennae each.

There was one room that wouldn't allow sunlight. The hall had an attic which served as a dump yard for old vessels, audio cassettes ("Parashakthi" kadhai vasanam and the likes), outdated medicines and "Soviet" magazine issues from the days of Stalin and Lenin. Also, anything that I wanted to hide from my little sister was thrown into the attic. It basically supported 9 families of rodents, 1 cat, its visitors and many colonies of termites among others. Occasionally, my uncle too.

There was a garden behind the house which was the abode of many creepy creepers - a water melon plant and snakes inclusive. Actually, 'garden' is a overstatement for what we had. Drumstick trees, few shrubs of shoe-flower, pumpkin creepers - were all that grandpa would classify. Rest were wild herbs and grass and he gave them different names on different occasions. The snakes were real though.
Considering that I spent most of my vacations as a kid at the said house, I had enough experiences to write an entire series of "Night of the scorpion and others Inc" unlike Nissim Ezekiel who stopped with just the one poem. Probably I would have started with 'The night of the angry ant':

I remember the night when I
was stung by an ant. One hour
of power-cut had driven him
to circle beneath the candle light.
More candles, one torch light,
more insects and the endless power-cut.

Yet to be enrolled in school
I had no homework nor sense.
Boredom caught me and I
tried to trap the ant
under a geometry box
(which was not mine).

Upon release, the angry ant
bit my little finger.
Tears down my eyes
and a red fluid down my finger
(for I was seeing blood
for the first time),

I turned and twisted in pain
singing 'why this kolaveri'.
My angry aunt killed
the angry ant and she
covered my finger with a cloth.
The bleeding stopped
and the pain subsided.

Did I stop crying?
No! Not until I was given a banana.
When the power was back
I saw the dead ant being carried
by its men while I
was still eating the banana.

It wasn't just about the nights anyway. In the mornings, we had a pack of monkeys visiting the locality at regular timings. If the monkeys crossed east-west, the time was 7am. If they crossed west-east, the time was 4pm. If they did not turn up - 'Ekathasi' celebration in local temple (which meant they did not have to visit our garden for food). One day, when my little sister was sleeping in the cradle and we were busy in the kitchen, a monkey had come into the house and was checking out the cradle. We had to shoo-shoo it, least my sister would have grown up to be the female version of Mowgli or 'Elizabeth of the jungle'. Only slightly different from how she grew up in my company.

Grandpa's house had a wide assortment of slippers though no one in the house wore them while in town. But at the mere sight of a mouse, each one would swing their favorite slipper. They rarely hit a mouse and only ended up hitting each other. The mice and myself had lot of fun.

While sleeping, grandma would spread the mats leaving a small margin between the wall and the mat. That margin was to be the undeclared wildlife corridor. The nocturnal insects would use it as a freeway without having to interfere with the sleep process of us, humans. But, occasionally we used to have man-insect encounter...like when a cockroach decided to take the road not taken and crawled over the over-bridge which was my arm. That was when, I used my well-trained shriek. Chorus by little sister. It was in this encounter that the above said cockroach became differently-abled due to grandma's angst. (In daylight, it would not have been handicapped...it would have been simply dead).

It wasn't just about fear and adventure though. There was the joy of capturing jewel beetles (பொன் வண்டு) in match boxes; feeding sparrows; following the squirrels; watching the garden lizard hoping it would change colors like a chameleon; feeding dead beetles to ants; planting mango seed; urinating on it hoping it would grow fast; even waiting for 4pm for the evening parade of the monkey pack.

Eventually we grew up, technology advanced and a sense of hygiene took over. The garden was relatively cleaned up, the trees were pruned. These days, the monkey population has migrated elsewhere, sparrows are not to be seen, squirrels are rare. The crevices and clefts are still there in lesser numbers. The fear of scorpions and centipedes is also still there, though I believe they have already departed us.

My nieces and nephews do not visit the house much and they don't believe my stories. What a pity!!

(post script: "Venu Lane" is the name of the street in which my maternal grandparents lived. I plan to write occasionally, based on my experiences from the days in Venu Lane).

Labels: About Self, English, My picks, Venu Lane

I got goosebumps while reading this. I just want to pinch your cheek and say awesome. 'Niece and nephew' part is touchy! I also remember how we tried to get hold of a cockroach for siva anna's zoology assignment. And the way, we tried to differentiate male monkey with the female and how we used to tremble to cross the other bathroom stretch which we believed as the abode of deadly scorpians. 'We had to shoo-shoo it, least my sister would have grown up to be the female version of Mowgli or 'Elizabeth of the jungle'. Only slightly different from how she grew up in my company' - love this part. So true!

Reading this .. i recalled my childhood!!

Even though i dont recollect those 5,7 or 8 legged insects but i had a different and yet such childhood memories of coimbatore!! :)

Loved the narration, the poem and the humor and sarcasm here and there :D

//Only slightly different from how she grew up in my company. :P

I would love to read the forthcoming installments of Venu lane.

Every bit reminded me my childhood days. . And your writing is getting to next levels.. keep it flowing.

Enjoyed it every bit. Brings back nostalgic memories of childhood its pleasures. Keep going man.

I could feel R.K.Narayan style of writing in content & in language.

@All - I feel good to see your comments. Very encouraging.

@Keer: Yeah, the deadly dark-room. I forgot to write about how we used to run across that stretch to avoid an encounter.I still feel the chill :)

@'Morgan: Thanks a lot. I feel honored.

@Geetha: Thanks very much.

Nature still retains its own habitat(though it may have reduced). But we people in name of hygiene & comfort, love in living far from it. Gross effect may seems to be positive, but Net effect of such migration is negative, not even nil...in terms of peace of mind, eroding morality and ethics, growing microbial resistance, unsustainable way of life and so on!!!

Poor people, we deceive ourselves...,

Awesom..though i was not a part of it, i njoyed reading tis..
Arthropod's antennae..
My angry aunt killed
The angry ant............good