We were at one of the many Geyser Basins in Yellowstone National Park (YSNP). There was steam coming out of the soil in whichever direction we turned our neck. That, with the smell of Sulphur made us feel as if we had entered the chemistry lab of the earth. As we were wondering about the marvels that this wonderful world keeps amusing us with, Seshu indicated that such Geysers are present in Tamilnadu too and he said Kalki has written about them. This is what we notoriously know as 'Kollivaai pisasu' :). We let some of the steam precipitate into our cameras and camcorders. We were wondering what would happen to these hot geysers on a rainy day. Our cloud of thoughts must have hit the clouds hovering above us....it started to drizzle. By that time, we had already walked some distance away from the basin. 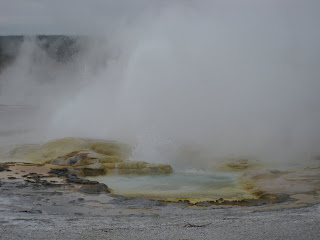 Back to the car and Jai drove towards our first scheduled destination for the day - "Old Faithful". This is a natural fountain that faithfully pumps out water to an average height of 140 feet at predictable intervals and is a major attraction. We added ourselves to the crowd that had already gathered around the geyser. It was giving signs of an erruption as the sky started to drizzle. After teasing a couple of times the faithful started pumping out water to about 40 feet height and long enough for a few snaps and a good 5 minute video. The sky's counteract was no match. The fountain weakened finally and went into hibernation. 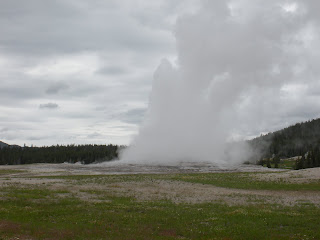 There were geyser's all around the place. This is called the Upper Geyser Basin. The land here is (in YSNP) highly sensitive and hence we were asked to use the designated pathways. As we walked past geyser after geyser - small, big, eye shaped, bee hive shaped, blue colored, green colored - we began to get bored. There was a small path that lead to the "Solitary Geyser". After hiking a 3 mile distance, it wasnt 'solitary' anymore. We were giving it company. A notice there said, this was an ordinary geyser and started errupting when they tried to drill pipes into it to supply water to the nearby areas. "Dont mess with me" was the message from mother nature, as the geyser started errupting every 7 minutes after that - even after the pipes were removed. We were about to leave when she made her "Dont mess with me" statement one more time with a 2 feet erruption. 'Point noted' - we said to ourselves and left her back to her loneliness.

The chemical equations within our body, lead us towards the sign 'Food'. We had a good lunch at the designated food place in that area (vegetarians do have a few good options). Now we had to choose between checking in at the motel or continue our exploration. Much to the disappointment of Seshu, we decided to stink through the rest of the afternoon and continue with Siva's schedule. Next destination was west thumb basin. Having had enough of the H2O + H2SO4, we decided to skip it and asked the GPS to direct us to Yellowstone lake. 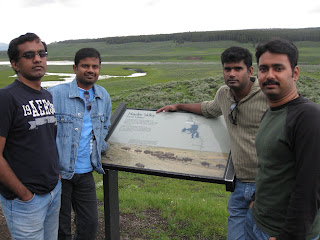 (Anti-clockwise: Jai, Srikk, Siva, Me)
"Here I am. This is me. There's nowhere else on earth I'd rather be.
..
It's a new world. It's a new start. It's alive with the beating of young hearts.
It's a new day. It's a new plan. I've been waiting for you"
....Bryan Adams was singing through the stereo as we let our senses dissolve into the beauty of the eco-system. It looked as if the sun would rest soon. We wanted to cover the Grand Canyon (the one in YSNP) that day. We were beginning to doubt if we could achieve that. As if to cheer us up, the sun came out shining. We felt as if somone ported us to a totally different latitude. To our right was the vast lake and bordering it were snow covered mountains. It was a stunning sight. But we coudnt get a good camera view of it. 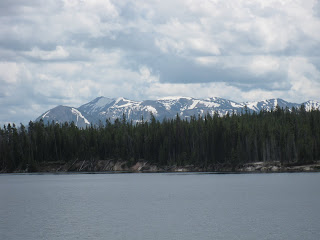 We kept that road for another day and accelerated towards the yellowstone lake visitors centre. We had no information to be collected there....we just had to respond to Nature Inc's call.
The urea mixed geyser from within our body was no match to the sulphur version...but nothing can give a better feeling :). When we were back to the car, waiting for Seshu, there was a hail storm. The small ice pellets dropping from the sky was new to the Chennai folks (I had experienced it in Trichy before!). Inspite of its intensity, Jai, Seshu, Siva and Srikkanth ventured out of the car to have a feel of it. The hail stopped shortly. We reached the board that read 'Yellowstone River'. Took some 'we were here' snaps. 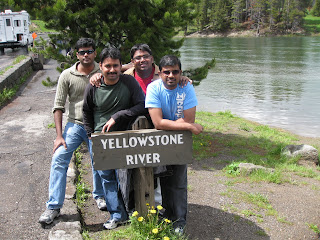 (Me, Siva, Seshu, Jai)
We consulted the maps, Siva's schedule, our watches, the sunlight. We decided to push Tatton park to the next day. Had yet another tensed discussion over which was north and which was south. Then rolled the wheels towards our next major destination - the canyon. We knew the canyon had different views, but had not done the homework properly. So, we did not know which one to visit first. Since we hit the road to upper falls first, we pulled over there. The upper falls is yet another place where water proves the worth of perseverance. The massive gallons of water, through years of negotiation, cut through massive rocks forming a canyon and then fall with a heavy noise, force and magnitude to form the upper falls. The green tint and sharp turn just before falling were yet another treat to the sight which our cameras could not capture at all in whatever angle we tried. Seshu even climbed about 8 feet of a cliff to get a good shot. The water in its different forms and rich content had painted the canyon walls with orange, yellow, brown and green shades. We said a thousand 'Wow!!' and moved towards the car half-heartedly. 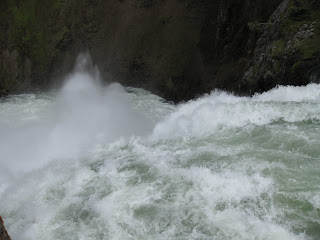 We referred the maps again to find the direction to the lower falls. After having seen the upper falls, the lower falls was just an academic interest to us. We reached the parking space for lower falls. The sign board there said we had to hike about 3/4 miles and a few feet down. The path seemed steep. There were kids who were climbing up the steep path after visiting the brink of the lower falls. They were our inspiration and we began to carry our not-so-young bodies towards the brink. It was tiring....very tiring....until we saw the best scenery of our life so far. Suddenly we forgot all the tiredness and hopped around to take pictures. We were standing at the point where the lower falls dropped a good 350 feet and the stream rushed through the Canyon. Grand it was!! As a kid, we all would have drawn a river flowing in between two mountains. May be we all got a copy of that picture installed in our brain from here. We had begun to forget the amusement we had at the geysers, at the old faithful and the just visited upper falls. The sight here topped it all. After treating our senses to the sound, scene and harmony the brain enjoyed at the spot, we began to climb the altitude back. 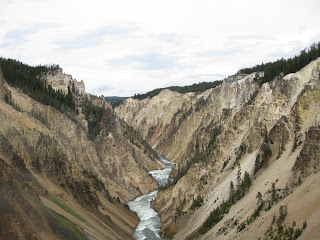 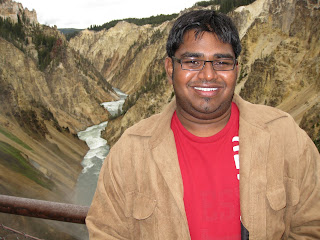 (Above: Seshu and the canyon in background)
We decided to go to Lamar Valley next to watch the wild life....and drove in that direction. The route was through a hilly area with practically no protection on the steeper side of the road. We were tired, it was getting late and weren't sure if it will be safe to ride through a hilly road. So, we decided to get back to the town and check in at the motel. On our way back we got to see some deers, bisons and elks. But they were not in a group. Mostly alone or just a couple.
We spiralled through a hilly path getting a glimpse of the snow capped mountains again and of some lean stream of water. We were immersed in thoughts of what a day it had been. Sunny, drizzling, hail storms, geysers, snow caps, fountains, waterfalls, canyons, rivers, lakes and wildlife with a GMC, GPS, iPod, iPhone, Canon, HP and Nokias.....whoo. 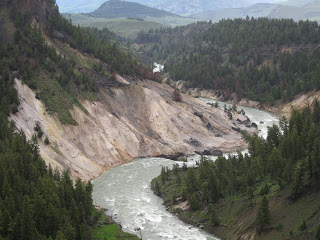 When we were in the final roads to the exit, Srikkanth threw the question - "what is the difference between faith, belief and hope". The discussion slowly and inevitably turned towards GOD. Srikkanth, Seshu - two orthodox guys - pitched against me and Jai - who have different kinds of belief or as others would say 'non-belief'. Siva had a head ache and even otherwise he generally stays away from the thick of discussions like this. As we exited the park, our points and counter points still continued....while the water bodies, animals, trees and the hot lava underneath were doing what they have been doing for millions of years. They didnt have a need to understand science or god to stay in harmony with the laws of nature. Absolutely contrary to man!!
(The best part is yet to come - watch out for Day2)
Posted by bhupesh at 8/29/2009 11:01:00 AM

hmm, u have a good memory sir...i forgot half the geyser names :) And Bryan Adams' reference was thoughtful n apt!!!

very interesting one.. :) HM, ur blogs are a good way to improve my patience level.. :) I read the whole blog in a single stretch.. i have stopped the habbit of scrolling down to see how big it is before starting to read it... :) BTW, u said ur third one will be the final one abt YS trip.. HM vaaku thavari vittan ;-) but am happy that i will have one/many more abt YS trip to read..

Express! Express! Express! :-) For how you began and I continued, this is looks like a crawling child flying instantaneously. But, the good thing abt it is the fun part isn't missing anyways. Do you want me to write 4 ;-)?

@ Krithi
I erased my comments for you, a couple of times and keying in my words for the third time.