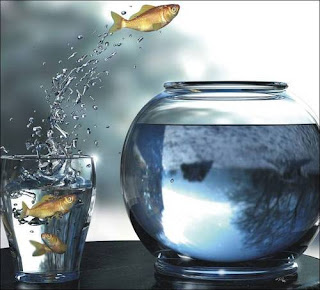 Dot 1
It was a saturday in 2000. Early days of college life. As a member of the "Leo club", I was helping with a blood donation camp organized within my college campus. Many of the readers of this blog being my college friends or co-workers, you probably know very well that I tend to be over-serious and hyper-responsible on such occasions, whether the occasion demands it or not - mostly not. This friend of mine, a girl, had been trying to get me out of the scene of action to say something (may be something like, "you stink"). I said, I will be there, but was continuously engaging someone or was just creating a "I am busy" atmosphere. Finally when I walked up to her and said, "sorry madam, I got busy"....for the first time she called me "Busy for nothing". That she continued to address me "Mr.Busy for Nothing", till the end of college, even in the slam book and that some of my other friends too started calling me so, is history. (That she also used to call me 'Badmash' (Rascal) is something I am making public now).

That phrase has become so much a part of me that, when someone asks me "Are you busy"...I often say, "yes, for nothing".

Somewhere in 2009, on one of the many lazy evenings, I started thinking a little deeper about the phrase. Ever since I joined college, I have always been busy with my own agenda. I haven't spent as much time with friends or family as others would have done. At least, till end of college, the 'busy'ness had been useful to others or myself. But, after taking up a job, all I have been focussing on is getting things done at work - more and more. For the most part, I have remained totally tuned out with respect to other aspects of life like - knowing the world, knowing people, travelling, thinking about investments, thinking about smarter career moves, getting license, filing tax, or even changing the address in my passport. But, that evening, it just ended with saying to myself, "How correct she was!! Oh boy, she is an oracle".

Dot 2
Again in 2009, I happened to watch the bollywood movie "Rock On" on Netflix. For those of you who do not know, it is a movie about how 4 college friends start a music band and then life takes them in different directions - 3 of them being successful in their line of work. Some incidents bring them together after few years and they resume the band. I liked the movie very much and still is in my list of favorites. That movie made me feel guilty about a few choices I made in life and many things I failed to even take a step towards.


Dot 3
After returning to India,one of the first things I did was to reload my i-pod with some latest songs. Thankfully, the friend who did it for me had "Rock On" in his collection. After shifting to Coimbatore, I happened to travel a lot between
Coimbatore-Erode-Chennai. For the first 2 months, my ipod was a great company during these travels. I played the songs from "Rock On", in a loop. Especially, the lyrics of "Sindbad the sailor", haunted me. Sometimes I felt very inspired, sometimes I felt sad and many times I felt a lot uneasy about the cliche choices I had made.

On one of these many travels, I wanted to listen to something other than "Rock On" and "Vinnaith Thaandi Varuvaya" and scrolled through the list of songs, when I stumbled upon podcasting of a collection of books. I started listening to "The Natural Mind - Waking up" by Alan Macmillan. I did not finish listening to the complete audio of the book...but, the few chapters that I listened to were very thought provoking. They made me think that I am a very insignificant being considering the timelessness and vastness of the universe and there hasn't been anything purposeful done by me to claim the special right to exist here.

Dot 4
I stopped being blind and deaf towards the everyday pain that people undergo to meet their basic needs. I stopped being critical of the beggars and less-intellects. I stopped thinking that my standard of living was because I had some special survival skills.

The hunger, the crowds, the fight to get a seat in the buses, the lack of courtesy to another human being are not new to me. I have grown up amidst this way of life. But, because I was developing empathy towards the less fortunate, I started viewing life through a different prism.

Dot 5
One of the significant personal improvements after returning to India has been the availability of time to read books. I have brought down the number of fictions I read and increased the count of non-fictions. Some of these books - "Go kiss the world", "7 habits of highly effective people", "A fist full of rice", "Thiruppumunai", "Mystics Musings", "The google story" - rekindled questions which have always been in my mind, but have been ignored in the pursuit of happiness as defined by the south-Indian society - score marks, go to a good college, get a job, focus on career, go abroad, buy a house, buy a car, marry a girl (a beautiful one), have kids, put them in the best of schools. The translated book "Thiruppumunai" - original version in English titled "Making breakthrough innovations happen" inspired me greatly. Also my interactions with my friends Suren and Anitha who are working with a non-profit organization made me question my aspirations in life. I started feeling uncomfortable to remain in the 'safe zone'.

Dot 6
Attaining the age of marriage meant attending the marriage of many school and college friends. During these gatherings, I got to meet some old friends most of whom had chosen the usual text book way of south-Indian life. However, I also got to meet few friends who had dared to think differently. These guys inspired me.

During a chat with my close friend Suresh who is preparing for Civil Service Examination, he explained me what and how he was preparing. The preparation and process was so interesting and immediatley I recognized that, that was exactly what I have been wanting to do. I seemed to have found something to hold on to. Something that would give me the satisfaction of treading the road not taken. After the chat, I was searching for something in google and stumble upon a page that quoted from "The Alchemist" - "When you really want something, the whole universe conspires in helping you achieve it".

After a month, I submitted my resignation. From April 12th, I will be a student again. I will be busy, hopefully, not for nothing.

Post-Script
Here is a speech by Steve Jobs about connecting the dots. Hopefully I will connect my dots - if not - I will find other dots.

Labels: About Self, English, Philosophy

Glad that you recognized your 'dots'...all the best in connecting them, which differentiates legends from the ordinary south-Indians :)

Happy journey sinbad... All the best

All the best Bhupesh, you finally are on track now I guess..work hard..best of luck again :)

That quote from The Alchemist is the quote of my life.

We have been scribbling our life with haste. Its time to cross the 't's & dot the 'i's if not the whole.

WOW WOW... nicely written.. organised and super ending too. felt bad that the post has come to an end.

I know you will shine well in whatever u do.. So, come Chennai soon. Waiting to watch you prepare... Somehow, i hate IT (could be...chee.. chee indha palam pulikum style...) and am proud that u have chosen the road ppl like u should have taken... not too late :)

Hey HM, Good luck and wish u the very best.. :) U will definitely succeed in connecting the dots well.. U have put ur thoughts in a very nice way.. Well said Keerthana - "am proud that u have chosen the road ppl like u should have taken". Truly agree with u. Bro and sis have good times in Chennai together..

Hi friends, thanks for all the love and wishes.

Nice to read your post.All the very best for your studies.

I think I was not wrong when I called you 'Busy B.You were busy weaving your dreams:-)

Thanks Krithiga and well said Divya :))

I will echo Keerthana's comments. Truly an apt picture and an inspiring blog. It is only people who think different, that make a difference. I am very happy that you dared to go for something more than cliches. That does not imply that cliches are bad :0) but being different always takes courage. The road not taken - as Robert Frost said :))
Remember happiness doesn’t depend upon who you are or what you have; it depends solely on what you think.
Dale Carnegie

Good that you realized sooner than later :)

Am sure you will connect all the dots :)

All the best for the next step..

There is nothing called "Nothing" .. Everything has its own significance..its just upon on us on how important its for us :)

bhupesh...interesting thoughts... :) i think you are consistent and disciplined enough .so there is good probability that it will work out positively..

in a lighter vein..
ordinary ppl know that if one of the dots doesn't connect later,it will form a "?"

Dear Bhupesh
Nicely written. Glad that you chose what you love to do. Its never too late to start on something.
Manamaarntha Vaazhthukkal.